Having a Voice in Your Group: Field Experiments on Behavioral and Attitudinal Changes

One of the founding assumptions of social psychology is that groups influence human behavior—in particular, that an attempt to change a person’s behavior will fail in the long run if it does not involve her group. There has been enormous research interest in how groups motivate behavior change, but debates exist about the types of group structures that motivate change, and causal evidence with real world groups is rare. I conduct two field experiments in different contexts and with different populations to test the influence of increasing the participatory nature of groups over long-term behavior and attitudes. Study 1 experiments with 65 work group (1,792 workers) in a multinational factory in China. Study 2 experiments with 32 staff groups (172 workers) in an elite university in the US. In each experiment, half of the groups were randomly assigned to a 20-minute participatory meeting once per week for six weeks, in which workers were invited to speak and supervisors mandated to listen. The other half of the groups continued with status quo meetings. Participatory meetings led to a 10.6% increase in treatment factory workers’ productivity, which endured for 9 weeks after the experiment. I found that the frequency of voice within the group, rather than information or goals, drove the behavioral change. The treatment also led workers to be less authoritarian and more critical about societal authority and justice, and more willing to participate in political, social, and familial decision-making. Results in study 2 replicated such findings. This research highlights the power of participatory group dynamics in changing behavior and generalized attitudes across very different contexts, both for theoretical understanding and pragmatic intervention in behavioral and attitudinal change toward social institutions and hierarchy.

Sherry Jueyu Wu’s research is concerned with group influence over long-lasting behavioral changes, and decision processes under resource disparity and social inequality. “As a social psychologist and behavioral scientist, I study the equilibrium of forces ― from the individual, the group and the social environment ― that drive long-term behavior and attitudes in the real world,” she says. Wu’s research in group dynamics has shown that changing a small facet of group life can lead to a change in a long-term behavioral pattern and in generalized attitudes. She conducted two large-scale field experiments with groups of Chinese factory workers and American university staff. Across 97 work groups and 1,924 workers, she found that increasing voice in groups through a brief intervention significantly boosted workers’ productivity. “The brief and immersive experience of a more egalitarian power structure in one’s work group shifted their attitudes toward authority and justice at the local organization,” she explains, “and in society more generally.” Overlapping with her research on behavioral change, she has investigated people’s decisions within and perceptions of inequality and scarcity. “Social influence from nudges and choice architecture shifts behavioral patterns,” she says. “Insights gained from these socio-cognitive processes may apply broadly to how we design interventions to tackle poverty and inequality.” Her current research questions ask: How can groups motivate us and sustain behavioral change? How do we respond to inequality and hierarchy, and what’s the impact of resource scarcity and inequality on people’s decision processes and psychological outcomes? How does diversity affect our performance and subjective experience? How do we design psychological tools to nudge people into adopting more desirable behavior? Outside of academia, Wu enjoys yoga and meditation, and being an amateur physicist. 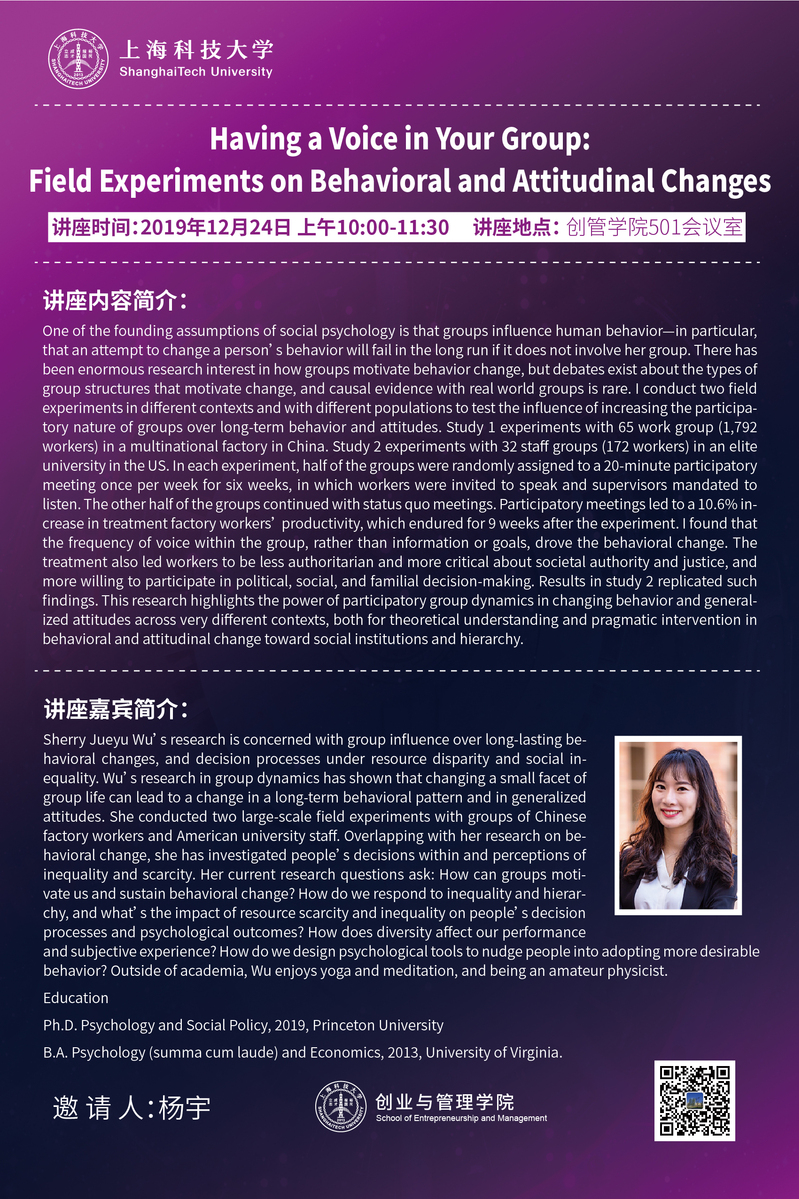