This paper studies the impact of bike sharing on house prices. We combine the order-level records of a major sharing bike company with the house-level listing data and the Baidu Map point-of-interest (POI) data. We find that bike sharing, by itself, negatively affects house prices. However, the interaction of bike sharing with subway stations has a positive effect, indicating that bike sharing is a good solution to the “last-mile” problem. Combined together, the net house price premium caused by bike sharing is 1.5% for an average house listed three months after the launch of sharing bikes. However, unlike subway stations, the interaction between bus stations and bike sharing does not lead to a house premium. Finally, at an aggregate level, the net effect of sharing bikes is positive (negative) in zones that are close to (far from) the city center. This is consistent with our micro-level findings, considering that the density of subway network decreases with the distance from the city center.

Anming Zhang is a Full Professor in Operations and Logistics and holds Vancouver International Airport Authority Chair Professor in Air Transportation at Sauder School of Business, University of British Columbia (UBC). He served as the Head of the Operations and Logistics Division, Sauder School of Business (2003-2005), and as the Director of UBC’s Centre for Transport Studies (2003-2004). He is President-elect of the World Air Transport Research Society (ATRS) and the President-elect of Transportation and Public Utilities Group (TPUG) of American Economic Association. Dr. Zhang is the recipient of the “Yokohama Special Prize for Outstanding Young Researcher” awarded at the 7th World Conference on Transportation Research (WCTR) in Sydney, Australia in 1995, and of the “WCTR-Society Prize”, awarded to the overall best paper of the 8th WCTR in Antwerp, Belgium, in 1998. In June 2014, he won the “Best Overall Paper Prize” at the annual ITEA (International Transport Economics Association) Conference on Transportation Economics, Toulouse School of Economics, France. Currently, he is also the VP (publications) of WCTR.

Dr. Zhang has published over 170 refereed journal papers and 30 book chapters in the areas of transportation, logistics, industrial organization, and Chinese economy. He has co-authored two books: Globalization and Strategic Alliances: The Case of the Airline Industry, 2000, Pergamon Press, Oxford; and Air Cargo in Mainland China and Hong Kong, 2004, Ashgate, London (Chinese editions published both in Hong Kong and Mainland China). 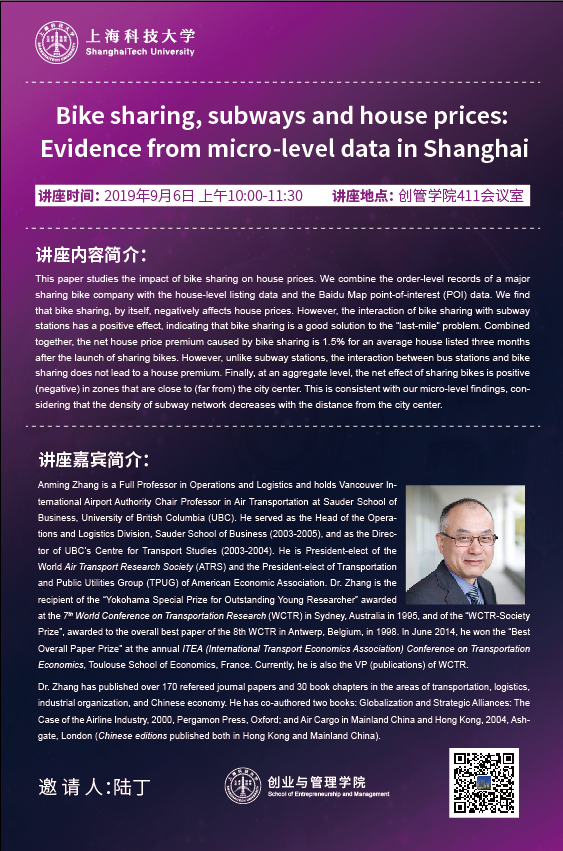